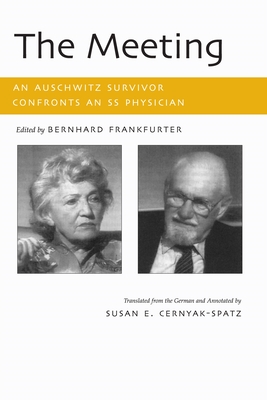 In this rare interview M nch--the only SS member acquitted during the 1947 Cracow war crimes trial refers to himself as a "victim," claiming that because he had to follow orders he was "no less a victim than his prisoners." The Meeting grew out of a documentary film in which M nch was first interviewed by Viennese filmmaker Bernhard Frankfurter. As head of the Waffen SS Hygiene Institute M nch had controlled hundreds of lives. Intrigued by M nch's responses, Frankfurter arranged for Ostermann, whose mother was German and her father Jewish, to conduct a book-length interview, for which he provided a concluding essay. The dramatic structure of the discussion follows the events of the Nazi occupation chronologically. As Ostermann initiates questions regarding reasons for M nch's involvement (Was it a conscious endeavor? Did he participate willingly?), the book adds important new information to the testimonial literature of the Holocaust.

Bernhard Frankfurter was an international film director whose documentary film credits include Capitalism in Thirds (1975), On the Road fo Hollywood (1982), SS Nr . .. . Terminal Auschwitz (1984), and Love Life-Live Death (1989). Before his death in 1999, he was also active as an editor, columnist, and scriptwriter, and he founded the Eastern-Western Media Network in 1994.Susan E. Cernyak-Spatz is professor emerita of the Department of Foreign Languages at the University of North Carolina at Charlotte. She is the author of numerous articles and books, including German Holocaust Literature and Hitler's Gift to the Jews: Translation of Norbert Troller Diaries.