My Own Words (Hardcover) 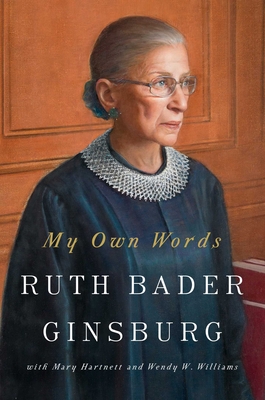 The New York Times bestselling book from Supreme Court Justice Ruth Bader Ginsburg—“a comprehensive look inside her brilliantly analytical, entertainingly wry mind, revealing the fascinating life of one of our generation's most influential voices in both law and public opinion” (Harper’s Bazaar).

My Own Words “showcases Ruth Ginsburg’s astonishing intellectual range” (The New Republic). In this collection Justice Ginsburg discusses gender equality, the workings of the Supreme Court, being Jewish, law and lawyers in opera, and the value of looking beyond US shores when interpreting the US Constitution. Throughout her life Justice Ginsburg has been (and continues to be) a prolific writer and public speaker. This book’s sampling is selected by Justice Ginsburg and her authorized biographers Mary Hartnett and Wendy W. Williams, who introduce each chapter and provide biographical context and quotes gleaned from hundreds of interviews they have conducted.

Witty, engaging, serious, and playful, My Own Words is a fascinating glimpse into the life of one of America’s most influential women and “a tonic to the current national discourse” (The Washington Post).

Ruth Bader Ginsburg (1933–2020) was Associate Justice of the United States Supreme Court. Born in Brooklyn, New York, she received her BA from Cornell University, attended Harvard Law School, and received her LLB from Columbia Law School. From 1959 to 1961, Ginsburg served as a law clerk to the Honorable Edmund L. Palmieri, Judge of the United States District Court for the Southern District of New York. She was a professor of law at Rutgers University School of Law (1963–1972) and at Columbia Law School (1972–1980). She was appointed a judge of the United States Court of Appeals for the District of Columbia Circuit in 1980. President Clinton nominated her as Associate Justice of the Supreme Court, and she took her seat on August 10, 1993.

Wendy W. Williams is Professor Emerita at Georgetown Law, best known for her work in the area of gender and law, especially concerning issues of work and family.

“At the heart of My Own Words is an abiding commitment to civility, to institutional norms, to the infinite possibilities of dialogue and cooperation, and to the now-dubious notion that protecting outsiders and others is a core American value. . . . Above all, always in her own methodical way, what shines through these essays is Ruth Bader Ginsburg, feminist, who truly could not conceive of a world without meaningful gender parity in the 1970s . . . as a collection of thoughtful writing about perseverance and community and the law, it is a tonic to the current national discourse.”
— The Washington Post

“Ginsburg has used her words to promote equality and stem discrimination as well as to express gratitude and to celebrate others who did so before and with her. . . . exceedingly readable, thanks to Ginsburg’s characteristically precise and unembellished prose.”
— Newsweek

"A comprehensive look inside her brilliantly analytical, entertainingly wry mind, revealing the fascinating life of one of our generation's most influential voices in both law and public opinion."
— Harper's Bazaar

“A sort of greatest hits album....devotees will no doubt be delighted to have some 300 pages of Ginsburg all in one place.”
— Associated Press

"The Notorious RBG makes it even harder to ponder her eventual absence with a look at gender inequality, the Supreme Court’s inner workings, and the too-little-remarked-upon intersections of law and opera."
— New York Magazine

"What emerges is not a portrait of a take-no-prisoners advocate but a strategic legal plotter who understands how to bring her audience around to her point of view."
— USA Today

"The selection showcases her astonishing intellectual range, from law and lawyers in opera, to tributes to Louis Brandeis, William Rehnquist, and Gloria Steinem, to the significance and form of dissenting opinions. The book also includes a number of revealing speeches Ginsburg has given about her historical heroines . . . Hartnett and Williams’s brief biographical introductions to each section show how much Ginsburg has heeded it."
— The New Republic

"Readers will gain unprecedented insight into the inner workings of the Supreme Court and garner unparalleled appreciation for one of its finest minds.”
— Booklist

“A collection of her writings that will offer even more. . . . Justice Ginsburg’s impact not only on the legal profession but also on young women contemplating such a career path is undeniable.”
— Library Journal

"Much recommended as a Christmas gift for smart, ambitious nieces. And nephews, too."
— The Guardian

"[My Own Words] reveals a more personal side of the unlikely icon who has inspired operas, tattoos, T-shirts and millions of young women who never knew that the law was once reserved for male lawyers."
— CNN.COM

“An excellent introduction to this Renaissance woman . . . cogent, well-reasoned, and accessible . . . Even those who have followed the octogenarian jurist over her long and distinguished tenure on the Supreme Court will find plenty of less expected items to relish . . . At a time of bitter political partisanship, her respect and affection for colleagues with different views, as displayed in posthumous tributes to fellow justices Rehnquist and Scalia, are very welcome. The variety of subjects is impressive, and Ginsburg’s gift for concision enables her to discuss them in enough detail to engage interest while leaving the reader wanting more.”
— Publishers Weekly

“Not surprisingly, she serves as an exemplar, and her work toward gender equality is well represented in this superb book. . . . required reading . . .  invaluable.”
— Library Journal (starred review)

“No sitting Supreme Court justice has the adoring fan base Ruth Bader Ginsburg has. . . . the amicus briefs, and, later, bench announcements included here are recognizably impressive, even to civilians, in their lucidity, calm persuasiveness, and avoidance of jargon on one side and distracting captiousness on the other. The more informal writings in My Own Words share those qualities while adding charm.”
— Bookforum