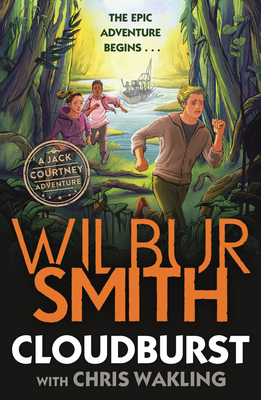 The epic adventure begins . . . Cloudburst is the first book in the Jack Courtney adventure series, for a whole new generation of fans!

Jack Courtney has lived in the UK his whole life. But this summer his parents are traveling to the Democratic Republic of the Congo for a gorilla conference, and they've promised to take Jack and his friends with them. When his parents go missing in the rain forest, abducted by mercenaries, nobody seems to have any answers. Jack is pretty sure that it's got something to do with the nearby tantalum mines, but he needs to prove it. Along with Amelia and Xander, Jack must brave the jungle to save his parents. Standing in his way is a member of his own family—Caleb Courtney. There are western gorillas, forest elephants, and hippos. But there are also bandits, mercenaries, and poachers. The three friends will need their wits about them if they are not only to save Jack's parents, but their own lives too.

Wilbur Smith is a worldwide phenomenon. His readership has built up over fifty-five years of writing. Born in Central Africa in 1933, Wilbur became a full-time writer in 1964 following the success of When the Lion Feeds, and has since published over forty global bestsellers, including the Courtney Series, the Ballantyne Series, the Egyptian Series, the Hector Cross Series, and many successful standalone novels, all meticulously researched on his numerous expeditions worldwide.