The Lego Story: How a Little Toy Sparked the World's Imagination (Compact Disc) 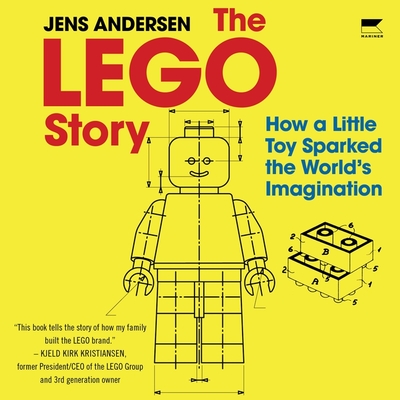 The extraordinary inside story of LEGO, based on unprecedented access to the company's archives and rare interviews with the founding family that still owns the company

This book tells the story of how my family built the LEGO brand. --Kjeld Kirk Kristiansen, former President/CEO of the LEGO Group and 3rd generation owner

It's estimated that each year between eighty and ninety million children around the globe are given a box of LEGO, while up to ten million adults buy sets for themselves. Yet LEGO is much more than a dizzying number of plastic bricks that can be put together and combined in countless ways. LEGO is also a vision of the significance of what play can mean for humanity.

This book tells the extraordinary story of a global company and a Danish family who for ninety years have defended children's right to play--and who believe grown-ups, too, should make the time to nurture their inner child. The LEGO Story is built on Jens Andersen's unique access to LEGO's own archives, as well as on Andersen's extensive conversations with Kjeld Kirk Kristiansen, former president and CEO of the LEGO group and grandson of its founder, Ole Kirk Christiansen.

A riveting cultural history of changing generations' views of childhood and the importance of play, The LEGO Story also a fascinating case study of how innovation and creativity helped leaders transform LEGO from a small carpentry business into the world's largest producer of play materials and one of the most beloved brands in the world. Richly illustrated with never-before-seen photos from the family's private archive, this is the ultimate book for fans of LEGO, revealing everything you ever wanted to know about the brand.